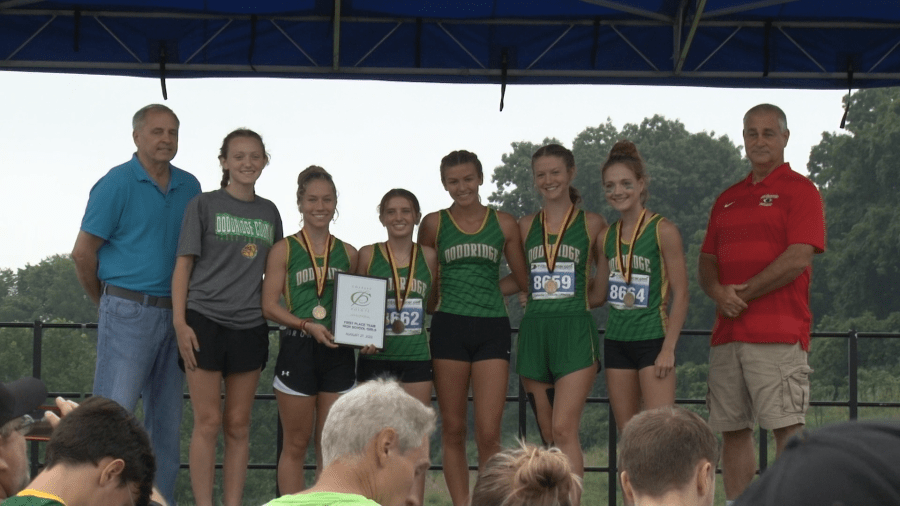 BRIDGEPORT, W.Va. — The “Charles Pointe Cross Country Invitational” was held outside of the Bridge Sports Complex, starting at 9 a.m. on Aug. 27.

Jon Griffith, a member of Bridgeport City Council, helped get the course installed for this year’s invitational, for the return of the race that they used to host when he was the coach at Bridgeport. He retired 2 years ago, but is remembered as one of the few who helped start up the race a while ago. The race was held up in the field for quite a few years until the construction of the bridge started, and then the COVID-19 pandemic happened. This is the first year back in the “new era of Bridgeport cross country.”

The course has a vast amount of acreage, beautiful meadows and rolling hills. With the baseball complex, it made parking easier, and it was part of the city so it was easier to cooperate with the school system as well. Now with the bridge, it is even better, said Griffith.

Bridgeport High School Cross Country coach and meet director, Nathaniel Lutyens, felt that it has been great and a total team effort in making up the event. Volunteers and community members came out to be on standby for the event in case if runners needed assistance. All in all, it had went good, the weather held out, the host facility had helped them with the course and in any way they could.

Lutyens believes in the value of running in developing as a person. Watching cross country runners in a race is a special thing for him, and he was more than happy to be able to watch and host from home. He is looking forward to watching his runners grow and and get better throughout the season. He is also thankful to everyone who put in their time and energy to make the invitational happen, and especially to Charles Pointe for sponsoring.

It is important when hosting big invitationals and meets because it is bringing those who are not from the area, into the community. Jon Griffith said, “it’s nice to have home events. You know, we do in football and soccer and basketball, and every other sport. So cross country is a little tougher because you need so much space, and you need a dedicated course, so, it’s just great to be able to have some events at home. Uh, in the future, we’d like to have the big ten conference, maybe the regional, we did in the past up here. We’d had the big ten and the conference, we even had the m-e-c college meet here several times. So, as this progresses through the future, we hope to expand and have more and more events up here.”

BUCKHANNON, W.Va. — A registered sex offender has been charged with sexual abuse in Upshur County. Kenneth Call According to...

CHARLESTON, WV (WOWK) – Thirty-five families are heartbroken as their new reality sets in following an apartment complex fire on...

KANAWHA COUNTY, WV (WOWK)– A woman was arrested on Tuesday for fighting the deputy who stopped her for a DUI....

Best BBQ joints in the US - hands down!

Exploring the MOST Profitable Shopping Mall in the USA : Queens Center