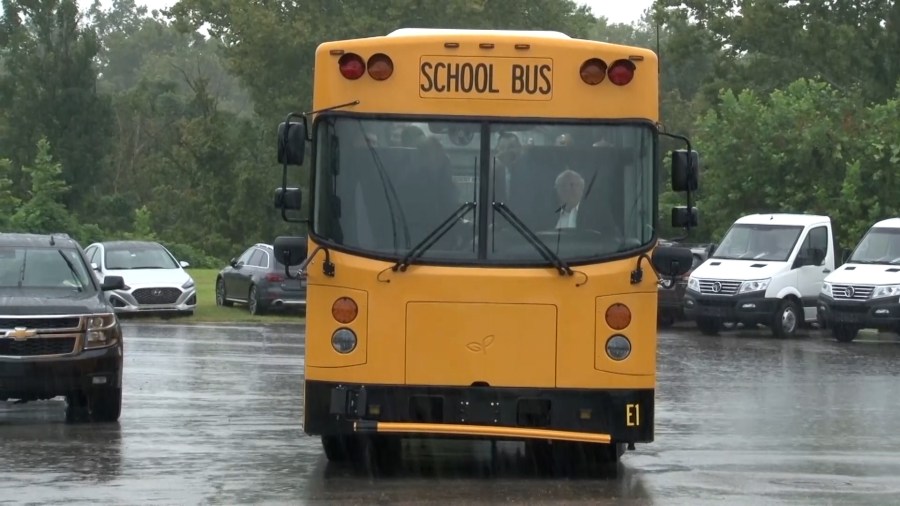 SOUTH CHARLESTON, WV (WOWK) — It’s official! A new company is operating in West Virginia, and it hopes to expand in years to come. It’s a new energy company here in the mountain state, and it is promising clean, renewable energy products.

At a ribbon-cutting ceremony Tuesday, Aug. 30, the GreenPower Motor Company officially launched its manufacturing facilities in South Charleston. GreenPower makes battery-powered electric school buses and has offices in Canada and California, in addition to West Virginia.

Among those who got to drive one of the news buses was none other than West Virginia Governor Jim Justice. For now, GreenPower has 17 employees here in the Mountain State but that should balloon to more than 200 within a year.

“The industry has hundreds of the buses driving on the streets of the United States throughout the country. And they have been performing very well, and again, clean air vehicles, not polluting the environment,” said Brendan Riley, President of GreenPower.

“They let me know that this was the site that they had chosen, and so immediately we get all the players together to start doing the negotiations and getting the deal done,” said South Charleston Mayor Frank Mullens.

GreenPower has already sold three electric school buses in West Virginia and anticipates more than one-hundred of its buses will be on the roads here a year from now. Training and education programs are underway at Bridge Valley Community and Technical College to help get the workforce prepared.

There are also federal grant programs available that can help school districts qualify for potentially hundreds of thousands of dollars in aid to start transitioning to electric buses.

BUCKHANNON, W.Va. — A registered sex offender has been charged with sexual abuse in Upshur County. Kenneth Call According to...

CHARLESTON, WV (WOWK) – Thirty-five families are heartbroken as their new reality sets in following an apartment complex fire on...

KANAWHA COUNTY, WV (WOWK)– A woman was arrested on Tuesday for fighting the deputy who stopped her for a DUI....

Best Things to Do at Disney World, Florida 2022

A brief history of the American shopping mall