by admin
in ECONOMY
0


Lambert and I, and many readers, agree that Ukraine has prompted the worst informational environment ever. We hope readers will collaborate in mitigating the fog of war — both real fog and stage fog — in comments. None of us need more cheerleading and link-free repetition of memes; there are platforms for that. Low-value, link-free pom pom-wavers will be summarily whacked.

And for those who are new here, this is not a mere polite request. We have written site Policies and those who comment have accepted those terms. To prevent having to resort to the nuclear option of shutting comments down entirely until more sanity prevails, as we did during the 2015 Greek bailout negotiations and shortly after the 2020 election, we are going to be ruthless about moderating and blacklisting offenders.

Please do not write us to ask why a comment has not appeared. We do not have the bandwidth to investigate and reply. Using the comments section to complain about moderation decisions/tripwires earns that commenter troll points. Please don’t do it. Those comments will also be removed if we encounter them.

Anthony Fauci Should Have Resigned a Long Time Ago Jacobin

No need to isolate for 5 days if COVID-positive as long as symptoms improve: Ontario top doc Global News. Lambert will claw his eyeballs out if he sees this.

The CDC added 476 new confirmed monkeypox cases in the USA 🇺🇸 in the last 24 hours increasing its total case count to 19,465.

First came the heatwaves, then the floods: Why Pakistan is on the frontline of the climate crisis France24

Mississippi Crisis Highlights Climate Threat to Drinking Water Nationwide The New York Times.  Resilc: “More troops in Syria and Somalia can help, along with another war with Iran and China…”

What do US forces want to achieve in Syria? Deutsch Welle

Iraqi Kurdistan says economy at risk of collapse, asks for US help The Cradle

Head of UN mission to #Zaporozhye thanks the Russian Federation for keeping his team safe from attacks from Zelensky regime forces, who tried to stop the inspection team from reaching the plant.

“I’m glad the Russian military did what they had to do to keep our inspectors safe,” pic.twitter.com/TUtsbupSAg

No tweets on the commando raid in English that I saw. So I include (a) that it did in fact happen and (b) it was a debacle. a debacle so bad that spin has yet to emerge. (See Johnson on the setup frpm Ignatius.)

Head of Russian oil giant that criticized Ukraine war dies after reportedly falling from hospital window NBC News. (Furzy) With a list of oil execs who met the same fate.

Zelensky Lets Out His Italian Luxury Villa to Russians For 50,000 Euros While Urging EU to Curb Visas for Russians IBT. Not confirmed but Captain Renault would be shocked

German FM: I will put Ukraine first “no matter what my German voters think” or how hard their life gets. pic.twitter.com/GwAqIZ2jL7

Poland puts its World War II losses at $1.3 trillion, demands German reparations CNN. Yves: “After everyone wrote off Germany’s WWII debt, this is pretty cheeky. And how about Polish reparations to all the Jews they killed?”

Reported sexual assaults across US military increase by 13% Military Times

Restored Venezuela-Colombia Ties a Blow to US TeleSur

Another sign Trump special master hearing didn’t go too well for DOJ: Bratt at one point argued that judge would have to impose an injunction on DOJ to keep it from reviewing further the docs https://t.co/rrxdmdsdBY

Today $NVDA was told to restrict chip sales in China & Russia by the US Government on August 26. $NVDA is down 20% since their initial sale, -5% in after hours today.

Would love to see some polling on if Americans prefer living or GDP https://t.co/A5jipG83F4

Support for labor unions is the highest it’s been in over 50 years.

Unions are winning more than 75% of elections — they’ve won more elections this year than they have in nearly 20 years.

Worker power is on the rise. pic.twitter.com/81heWWySns

America’s Affordable Housing Problem: How America got to be so unaffordable, and what we can do to make it more affordable; an analysis of good-in-theory v. outcome based policies Our Built Environment

Excavator operators at their best🏗 pic.twitter.com/JR4rdbATH5

Join Us In Celebrating 25 Years Of Techdirt! Techdirt

An Anti-Aging Supplement Might Actually Work Buzz About Medicine

Twitter made an edit button, but you’ll have to pay to use it engadget

I sent a photo of this rabbit that’s been frolicking around our neighborhood before. I had never been able to get this close to it. Hubby had tossed a carrot into the neighbor’s yard where it was munching weeds, and I decided the neighbors mightn’t like us encouraging it to stay in their yard.
I circumnavigated the rabbit to avoid frightening it, and as I bent down to retrieve the carrot, two things became apparent.
1st, judging by the many pellets, it was probably silly to worry about encouraging the rabbit to be in this yard. Clearly he’s spent a lot of time here.
2nd, the rabbit seemed to have followed me to the carrot, being just a couple of feet away as I picked it up.
I extended the carrot and was pleased that he took me up on the offer.
So, now, I MUST get a picture, thinks I.
My cellphone was in my left hand as I’d taken a couple from a distance, so the camera app was still active. I learned, then, that Apple IPhones don’t require a finger to touch the little white circle that activates the shutter. When desperate, a tongue will suffice. 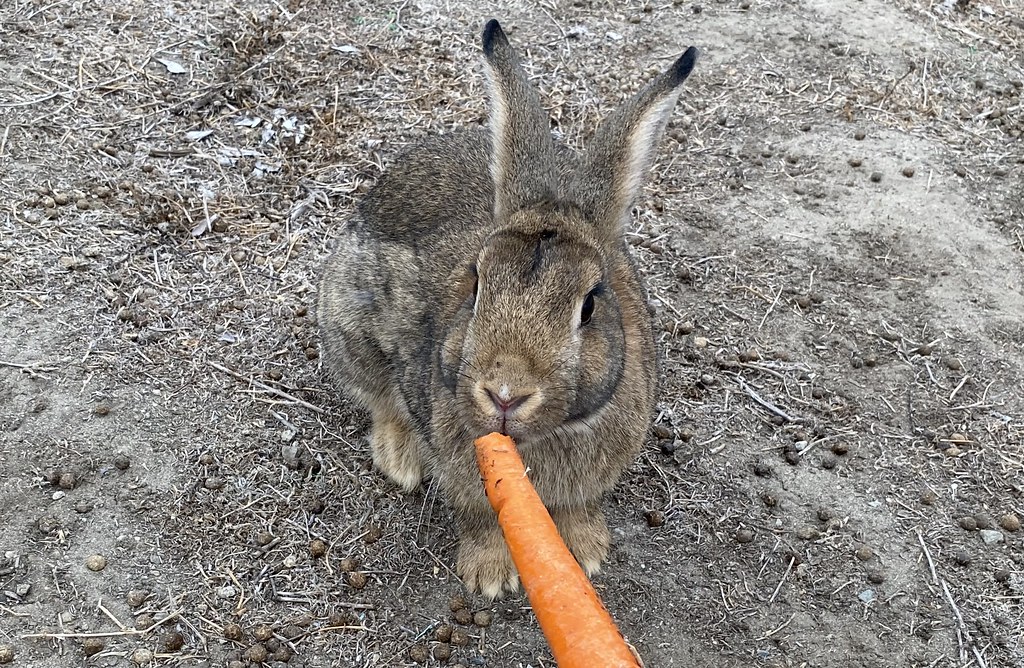 Sometimes dreams come true, and it’s okay to cry! (I cried all the way while processing this bird)

What time is it on the Moon? Nature Decriminalize Moonshine! Reason Potemkin Village Heisenberg Report. On housing. Climate Natural disasters...

By Lambert Strether of Corrente. Patient readers, I apologize that this Water Cooler is so light; I’ve had a tiring...

Why Are We So Afraid of Nuclear Power?

Yves here. In keeping with changing public views, Germany is set to beat a retreat from its commitment to phase...

By Lambert Strether of Corrente. As readers know, I stan for Covid nasal sprays, whether as prophylactics or vaccines (see...

Opinion: What's worth streaming in September 2022, from 'Andor' to 'The Rings of Power'