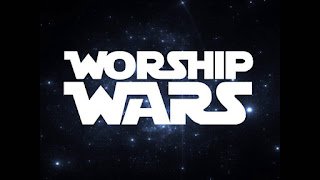 Here is a truth that many religion-beat professionals (a) haven’t really thought through or (b) they totally get it, but their editors do not.

Obviously, churches from coast to coast and around the world are engaged in heated debates, if not outright financial wars, about centuries of church teachings about marriage and sexuality. This makes headlines. These battles often reach the local level (ask United Methodists and, previously, Episcopalians).

Editors like that, since these battles can be framed as “politics.”

But there is another subject that frequently causes divisions in the pews (or megachurch folding chairs) — music. These battles rarely make headlines, even though they stir deep emotions between various generations of believers. In recent decades, this has led to discussions of “worship wars.”

I recently wrote a column — “Open Bible to Psalms: What messages are seen there, but not in modern praise music?” — that was, shall we say, “worship wars” adjacent. This led to me being invited as a guest on the national “Connections” podcast, with hosts Mike Thom and Colleen Houde. If you want to listen to that, CLICK HERE.

During that discussion I mentioned that I had another column coming up that was related to this subject. It later appeared with this headline: “Hillbilly Thomists — Dominicans tracing their roots into Appalachian music and faith.”

But the Psalms column was the hook for the podcast and it didn’t take long to veer into “worship wars” territory and the subject of commercialized music in the modern church. That made me flash back a decade-plus to a column with this headline: “FM radio reality in church.”

Maybe the best way to intro this bonus podcast is simply to reprint that column. So here goes.

The clock is ticking and soon Jeff Crandall while face the challenge of selecting the right music for the Christmas services at High Desert Church.

This will be tricky, because Christmas is what the 70-member staff at this megachurch calls a “federal” event. This means that these services will unite worshippers from the three radically different services that are held week after week at this booming congregation in Victorville, Calif., about 90 miles outside of Los Angeles.

“Christmas may be the only time when people want to hear traditional music, no matter what age they are,” said Crandall, the church’s 46-year-old “worship pastor” and the former drummer in a rock band called the Altar Boys. “Even kids who are totally into hard rock what to hear a few carols, which makes it easier to put together a service that pleases everybody. … We try to do the same thing during Holy Week and Easter.”

In recent decades, many churches have been shattered by the intergenerational strife that researchers call the “worship wars.” If you want to split a national church, change its teachings about sexuality or salvation. But if you want to split a local church, you toss the hymnal, hire a drummer, unleash the teen-agers or make some other musical change that rocks the pews.

But High Desert Church is the kind of church that has turned this equation around. Its goal is to build a multi-flock ministry that unapologetically offers all rock, all the time, but with bands that appeal to different packs of young people, as well as bands for believers from an earlier g-g-g-generation or two.

Now, this nondenominational flock is poised to become the poster church for this FM-radio-dial approach to worship, after being dissected in the hallowed pages of the New York Times.

On one level, the music divides this church. But on another level, the music is at the heart of worship services that create zones of comfort for people who have been raised in a culture in which consumers define themselves by their musical choices.

Thus, High Desert Church offers a “Classic” service for Baby Boomers and others who came of age during the “Jesus rock” explosion in the ’60s and ’70s. This service offers a softer brand of acoustic rock – think Byrds or the Eagles – that is easier on the delicate and even damaged ears of older worshippers, said Crandall.

Meanwhile, other musicians focus on the “Harbor” service for people between the ages of 30 and 50. It features the kind of soaring, inspiring rock that most people would associate with U2 and classic bands from the 1980s. Then the “Seven” service cranks things up another notch, with what Crandall described as a “dark” and “moody” mix of postmodern music for the young.

The music unites and the music divides. The challenge for church leadership, Crandall said, is to unite these flocks around a common vision when doing evangelism and missions – primarily through 18-person cell groups that focus on fellowship and prayer. Then there are those “federal” events that take place several times a year.

There are still Protestant and even Roman Catholic churches that are trying to create “blended” worship services that appeal to all ages at the same time. “Blended” is the term used to describe a mix of traditional hymns and rock music, switching back and forth between a pipe organ and those electric guitars.

Their intentions are good, said Crandall, but the results are guaranteed to offend people whose musical tastes are simply not compatible. Thus, he believes that “blended” services drive people away rather than pulling them together.

“This is reality,” he said. “Everything is about the music. When you go to the mall, you can even tell what kind of people are supposed to be shopping in the different stores just by listening to the music that is playing. Can you imagine kids wanting to shop in a store that is playing the music that their parents listen to? No way.”

Is there news here? Thumbs up or thumbs down?

Enjoy this bonus podcast and have a safe Labor Day.

FIRST IMAGE: Illustration with the “Happy Birthday, FM Radio!” feature at the website of the KATZ Radio Group.

Sole Survivor: This Commando Evaded the Nazis in the Arctic for 63 Days