School districts move to ease teacher stress, burnout: ‘The pandemic was so hard and so impactful and so stressful’ 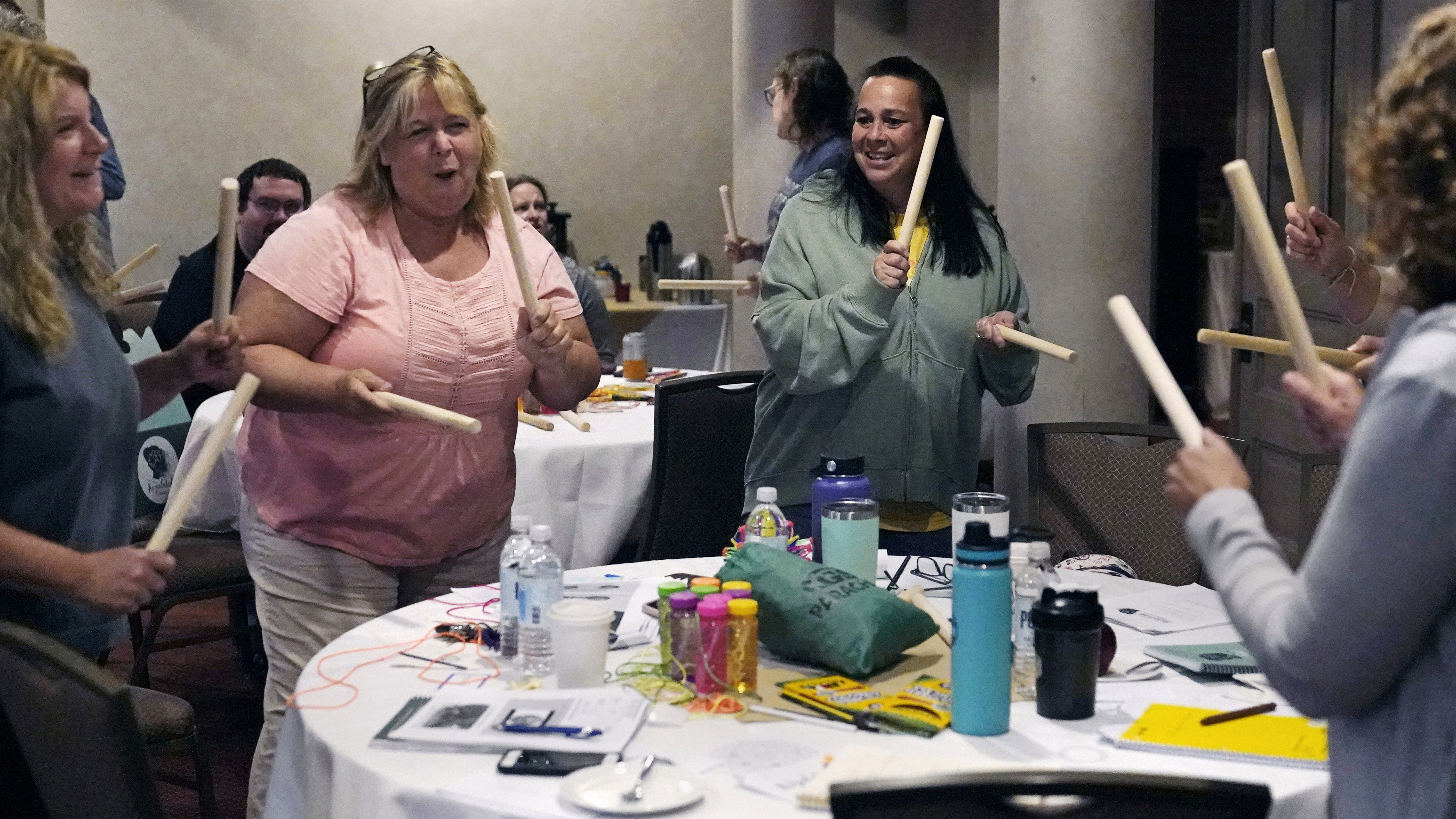 CONCORD, N.H. — With Prince’s “Raspberry Beret” blaring in the background, about 20 New Hampshire educators grabbed wooden sticks and began pounding their tables to the beat.

Las Vegas visitors pay too much for hotel rooms because big resorts use ‘under-the-table deals’ to jack up prices, lawsuit says

Emily Daniels, who was leading a two-day workshop on burnout, encouraged the group including teachers, school counselors, occupational therapists and social workers to stand up inside a hotel conference room. Before long, the group was banging on walls and whatever else they could find. Laughter filled the air. A few started dancing.

“Rhythm making offers the body a different kind of predictability that you can do every single day,” said Daniels, a former school counselor who created The Regulated Classroom which trains teachers on how to manage their own nervous system and, in turn, reduce stress in the classroom.

The training session is part of a growing and, some would say, long overdue effort to address the strains on educators’ mental health.

Addressing the mental health challenges of students coming out of the pandemic has emerged as a priority for schools nationwide. Many districts, facing hiring challenges, see tending to the educators as a way to help them help students and to retain them, amid stressors that range from behavioral problems to fears of shootings.

School districts have provided increased mental health training for staff, classroom support as well as resources and systems aimed at identifying burned out teachers and getting instructors connected to help.

Karen Bowden-Gurley, a fifth grade teacher, said she attended the New Hampshire training because of teacher burnout, but she also feels student burnout.

“The demands on all of us were really high and we were trying to make up for lost time for the couple of years that they fell back on their curriculum. But we forgot that they haven’t been in school for a couple of years so they missed that social-emotional piece. We are dealing with that in the classroom.”

In a survey by the Rand Corporation, twice as many principals and teachers reported frequent job-related stress as other working adults. A study from a coalition of mental health organizations of New Orleans found educators working during the pandemic reported rates of emotional distress similar to health care workers — 36% screened positive for anxiety, 35% for depression and 19% for post-traumatic stress syndrome.

“It’s all pretty bad,” said Leigh McLean, the primary investigator at the Teacher Emotions, Characteristics, and Health Lab at the University of Delaware School of Education, who has found levels of depression, anxiety and emotional exhaustion among elementary school teachers that are 100% to 400% higher than before the pandemic.

She saw those issues increasing the most among early career teachers and teachers of color.

“So it seems like the patterns among teachers are mirroring inequities that we’re seeing in the general population with underrepresented groups being hit the hardest, which is really unfortunate,” she said.

Some districts have or are planning to invest federal COVID-19 relief money in teacher mental health, seeing it as a way to also improve the classroom environment, boost retention and ultimately benefit the students themselves. Among the states singling out teacher mental health as priorities are Nebraska and Pennsylvania.

A Delaware district, meanwhile, hired two social and emotional learning coaches who work to address problems teachers are having in the classroom.

“If you can imagine a teacher has a classroom where students are engaged, they are helping each other and there is a positive supportive culture, their job satisfaction is likely to be higher,” Jon Cooper, the director of the Colonial School District’s health and wellness division. “They are less likely to leave the profession, and in turn, that supports their well being.”

Houston, which started building calming rooms where students can go to decompress, is hoping to do the same for teachers, according to Sean Ricks, the Houston Independent School District’s senior manager of crisis intervention, noting that he has seen a “significant rise in teachers that were in distress.”

The rooms would be different from the traditional teacher break rooms and a place where teachers could go during time off to “calm down and chill out,” Ricks said, adding they could have “could have some aromatherapy, maybe some soft music.”

“We want them to be able to understand that we have to take mindfulness breaks and self-care breaks during the academic day sometimes,” Ricks said.

An elementary school in Indiana starts the week with Mindful Mondays, where teachers guide their classes in deep breathing techniques. There are also Thoughtful Thursdays, where a student is called on to write a letter to a staff member to show appreciation, and Friday Focus, when students and teachers talk about self-care.

“My teachers know when they need to take breaks throughout the day I want them to take those breaks,” said Allison Allen-Lenzo, the principal at O’Bannon Elementary School.

One of these is Cultivating Awareness and Resilience in Education or CARE. In studies of its use among 224 New York City teachers, researchers found statistically significant improvements including reductions in emotional psychological distress, stress that comes from not having enough time as well as improvements in quality classroom interactions. Researchers also found that it extended to the students who showed increased engagement.

“Your stress level can rise without you even realizing it because your attention is so outwardly directed at everything else that’s going on around you,” said Tish Jennings, a University of Virginia education professor who led the team that developed CARE and was the lead researcher studying the program. “So what these practices do is build the capacity to be more aware of how you’re feeling at any given moment, so that you can be proactive.”

Back in New Hampshire, the educators pushed aside the tables and were mastering a series of stretching movements known as qigong. Then, they gathered in a circle for an exercise that aims to synchronizing their nervous system. Known as collective rhythm making, they began clapping their hands and snapping their fingers in unison.

The educators at The Regulated Classroom training believe these new tools — though on first glance a little unorthodox — invigorated them. Bowden-Gurley felt they allowed her to “train her brain to think differently” and planned to use them in the classroom to build a better sense of community and more confidence with her students.

Kelly Hurd, a kindergarten teacher, said the training gave her a sense of what is possible going into the new school year.

“I love teaching and I love the kids but it’s also hard,” Hurd, who experienced burnout before the pandemic and was part of the New Hampshire training, said. “The pandemic was so hard and so impactful and so stressful. I feel a sense of renewal and excitement and I do feel like I’ve been given permission to have more fun and focus on joy in school.”

Bed Bath & Beyond is cleaving off an arm in an effort to conserve cash in what could be its...

Las Vegas visitors pay too much for hotel rooms because big resorts use ‘under-the-table deals’ to jack up prices, lawsuit says

A federal lawsuit in Nevada is seeking class-action damages for countless hotel patrons who booked rooms in Las Vegas since...

Why Layoffs at 3M, Dow Are More Concerning Than Amazon, Google and Microsoft

Dow is planning to reduce costs by $1 billion in 2023. The cost cuts will include layoffs. Jeff Kowalsky/Bloomberg Text...

Who Makes Abrams M1 Tanks? What to Know About General Dynamics.

The U.S. has decided to send Ukraine 31 advanced Abrams tanks. Mateusz Slodkowski/AFP via Getty Images Text size As the...