Was Archbishop Rembert Weakland a flawed hero or an erudite heretic? — GetReligion 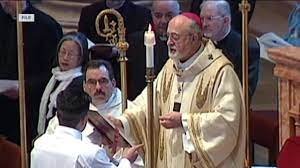 Writing obituaries about controversial — but to many people beloved — public figures is a difficult task that involves some complicated mathematics.

The death of former Catholic Archbishop Rembert Weakland of Milwaukee is a classic example and, here is the crucial point in this post, this was not a simple matter of “left” vs. “right.”

That said, there is no question that for decades — during the papacies of St. Pope John Paul II and Pope Benedict XVI — Weakland was a liberal Catholic superstar, with the word “liberal” in this case defined in political, cultural and doctrinal terms. But then there were revelations about his ethics and private life.

Thus, it was not surprising to see a double-decker New York Times headline with this kind of content:

In his long career, he was an intellectual touchstone for progressive Catholic reformers. But he resigned after the disclosure of a long-ago love affair.

In the 1980s and ’90s, Archbishop Weakland had been a thorny problem for the Vatican. Addressing issues that troubled many of America’s more than 60 million Catholics, he championed new roles for women; questioned church bans on abortion, birth control and divorce; and challenged the Vatican’s insistence on celibacy for an all-male priesthood.

He also became a leading critic of America’s economic and social policies during the administration of President Ronald Reagan, drafting a landmark 120-page pastoral letter on the economy that called for reordering the nation’s priorities to cut military spending and attack poverty and inequality.

However, let me stress that the Times placed that salute to Weakland AFTER a pretty solid, accurate look at his scandalous fall and other revelations that emerged about his behavior and decisions, for decades, during the Church of Rome’s hellish clergy sexual abuse crisis.

If you want to dig into the hard facts about Weakland’s role in that crisis, click here for crucial material — “Deposition of Archbishop Emeritus Rembert G. Weakland, O.S.B.” — by the independent Bishop Accountability organization. That is an organization that defied a simple “left” or “right” tag.

If you want to see what many would consider a “conservative” take on Weakland, see this post from canon lawyer and journalist J.D. Flynn at The Pillar. Here is the sobering second sentence: “Weakland is widely regarded as one of the most ignominious Churchmen in American Catholic history.”

Let’s move on. We will come back to the Times obit, looking at the mathematics of its overture.

But first, let me quote some material from the strong obituary in the archbishop’s local newspaper, the Milwaukee Journal Sentinel: “Former Milwaukee Archbishop Rembert Weakland dies at 95, leaves complex legacy.” Here is the opening:

Retired Milwaukee Archbishop Rembert G. Weakland, a once-towering figure in the American Catholic Church who spent his final years in virtual exile after a public fall from grace, has died. He was 95. …

Weakland served as Milwaukee archbishop for 25 years before stepping down in 2002 amid a scandal that involved paying hush money to a man who had accused him of sexual assault. Weakland had denied the allegations. He would come out as openly gay — possibly the first Catholic bishop to voluntarily do so — in his 2009 memoir “A Pilgrim in a Pilgrim Church.”

His resignation came as the public was beginning to grasp the scope of the church’s global crisis involving the sexual abuse of minors. Weakland, who protected abusive priests and at least initially treated complaints about them with disdain, came to be a face of the crisis in southeastern Wisconsin, a fate that would obscure his earlier accomplishments for the rest of his life.

That is a blunt, accurate summary.

At the same time, readers needed to know why this man soared so high in the church hierarchy.