Xiaomi Mix Fold 2 in for review


The Xiaomi Mix Fold 2 has landed at HQ and we’ve got an unboxing for you. It comes with a case for the rear glass panel, complete with an adjustable kickstand, a USB-C to 3.5mm dongle, a 67W charger, and a cable. 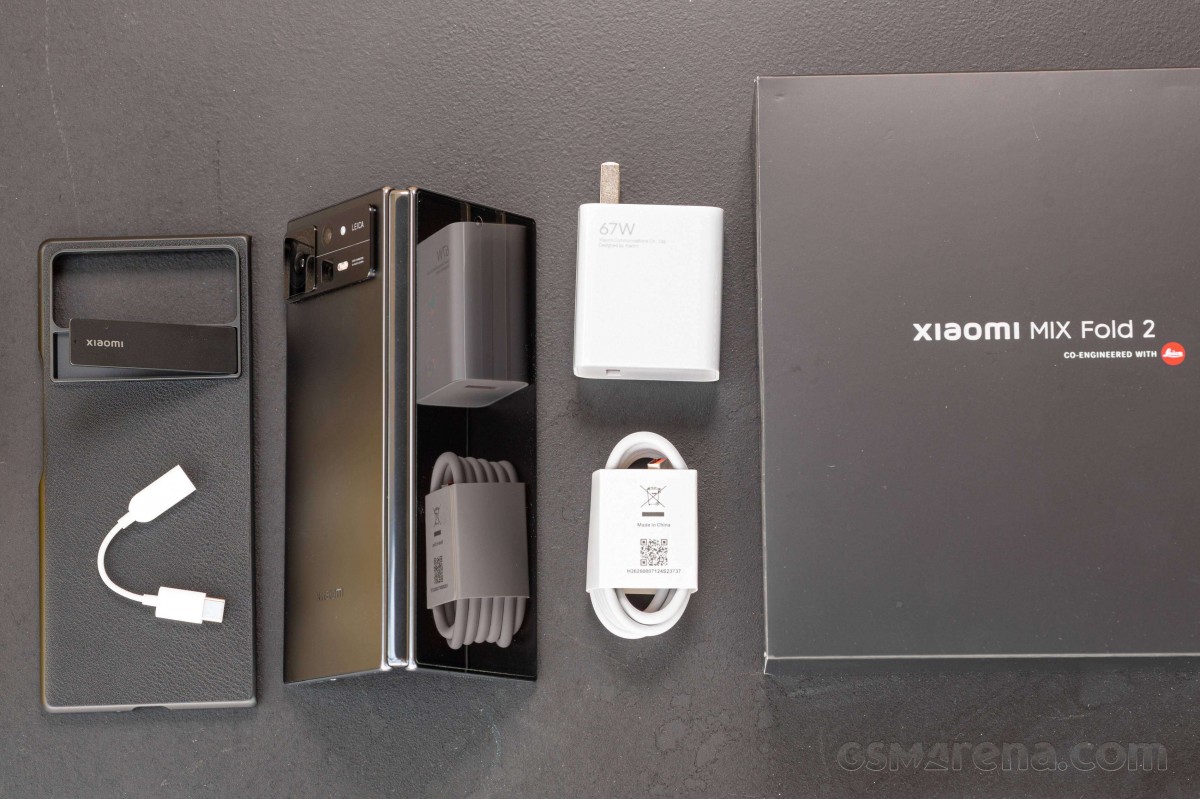 The Xiaomi Mix Fold 2 is among the thinnest foldables around. It measures 5.4mm when unfolded, and 11.2mm when folded. Compare that to the Galaxy Z Fold4’s 6.3mm/15.8mm, and the Xiaomi phone feels thin as air.

There’s a lot to say about the Mix Fold 2 in comparison to the Galaxy Z Fold4. The Xiaomi foldable has a conventional-feeling outer display with a 21:9 aspect, which is much better than the Galaxy Z Fold4’s improved, but still overly tall 23:9 cover screen. That means that using the Xiaomi Mix Fold 2 when closed feels almost as natural as using any slab phone. The outer screen is also bigger at 6.56-inch compared to the Fold4’s 6.2-inch screen.

Unfold the pair and the Xiaomi Mix Fold 2 has another clear screen size advantage. Its inner display stretches 8.02 inches, or 206 cm2 in total area, while the Galaxy Z Fold4’s foldable display is 7.6-inch or 183.2 cm2.

If you like your displays big, then the Xiaomi Mix Fold 2 has a clear size advantage over the Galaxy Z Fold4. Which makes the fact that the Xiaomi phone is 1 gram lighter and overall thinner than the Samsung foldable even more impressive.

Samsung has some advantages of its own. Multitasking on the Galaxy Z Fold4 is far more advanced – it’s easier to open an app in split screen view and you can have multiple instances of your browser app, which is something the Xiaomi Mix Fold 2 cannot do. That’s partly thanks to the Galaxy running Android 12L, which is optimized for folding phones, and the Xiaomi sticking to regular Android 12.

The Galaxy also has IPX8 water resistance certificate and support for the S Pen. Finally, the Galaxy Z Fold4 can be pre-ordered around the world, whereas the Mix Fold 2 is staying exclusive to China.

Outside of displays, the Xiaomi Mix Fold 2 continues with its impressive specs. Performance is up to snuff thanks to the latest Snapdragon 8+ Gen 1 with 12GB of RAM. Camera-wise, there’s a Leica-branded 50MP 1/1.56″ Sony IMX766 optically-steady main camera. The back also houses a 13MP ultrawide camera and an 8MP telephoto module with 2x optical zoom.

There’s a lot to unfold with the Xiaomi Mix Fold 2, if you’d pardon the pun. We’ll get right on it.

Spotify posted its financial report for the final quarter of 2022 and there is some good news and some bad...

The Poco X5 Pro will be officially announced for the Indian market on February 6 at 5:30 PM local time....

Galaxy S23 pre-booking campaign in the US closes in 2 days, last chance for up to $100 credit

Three weeks ago Samsung US kicked off a pre-booking campaign for the Galaxy S23 flagships and the Galaxy Book3 laptops....

The Samsung Galaxy S23 Ultra kept its spot on top of our trending chart ahead of the Unpacked event that...

Weekly poll: are Motorola’s new mid-range and entry level phones hot or not?

Austin and 30 Other Markets Are At Risk of Price Declines. Did Your Market Make the List?